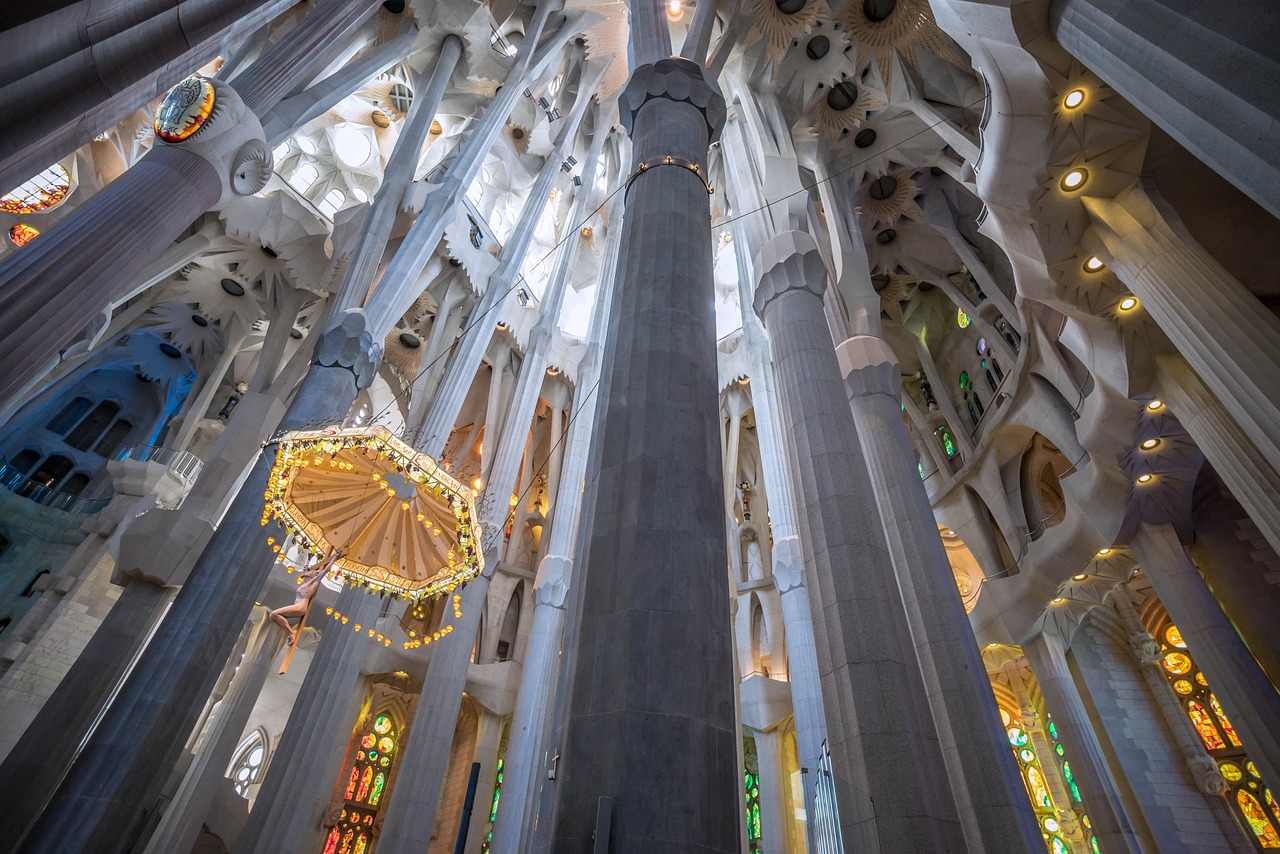 Gaudí designed two sacristies connected via the cloister that will surround the temple. This is the western sacristy and has one underground floor and five finished floors above ground with a glass dome. Visitors may enter the sacristy from inside the Basilica. The Liturgical Path takes visitors around the interior of the floor. Liturgical items designed by Antoni Gaudí are on display in the cloister and in the sacristy there are two wardrobes: one to store liturgical vestments worn by celebrants and priests and the other for various liturgical items, such as chalices and patens. The cupola has been a great step forward in construction of the Basilica.

The unique exterior construction will be the foundation for the temple’s central towers.

Wrought-iron hearse designed by Antoni Gaudí for the temple’s crypt around 1898. Triangle-shaped candelabra formerly used for celebrating tenebrae, which corresponds to the prayers of the office of readings (matins) and laudes in the Paschal Triduum.

Wrought-iron candelabra designed by Antoni Gaudí for the temple’s crypt around 1898. Used to celebrate mass, placed next to the altar.

Candelabra with two candlesticks topped with a Latin cross, designed by Antoni Gaudí for the temple’s crypt around 1890, with two additional candlesticks Used to celebrate mass, placed on the altar.

Moveable wooden pulpit designed by Antoni Gaudí for the temple’s crypt. Reproduction from approximately 1943 of the original from 1898. Formerly used by preachers to deliver their sermons to the congregation.

Tabletop missal stand for the crypt of the Sagrada Família Used to hold the missal, placed on the altar.

Two tabletop candlesticks for the crypt of the Sagrada Família designed around 1890. Placed on either end of the altar, in front, with candles lit during mass.

Chalk altar cards for Casa Batlló designed 1904-1906. From the 16th or 17th centuries until the Second Vatican Council (1962-1965), three altar cards were placed on the altar to help the priest say mass. Only the middle altar card was obligatory, with the hymn Gloria in excelsis Deo, the Cannon and the Credo. The other two altar cards (introduced in the 17th century) contained the prologue to the Gospel according to St. John and the words Lavabo inter innocentes manus meas, respectively.

Mahora Vadim on the top of Sagrada Familia