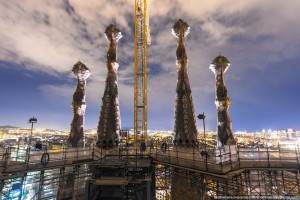 circumventing security previously, to take pictures and then down. One of the objectives raised in his day Mahora was climbing to the top of the crane of the Sagrada Familia in Barcelona, and judging by the pictures he have posted on his blog, it seems that he has succeed.

In his blog we can view snapshots of the young Russian grabbed on a crane with Gaudi monument to his feet.

Other buildings have also succumbed to the skills of young Mahora. Among them, Notre Dame and the Sacre Coeur Basilica in Paris.

Want to join the discussion?
Feel free to contribute!

Insisted of capturing the skyline of Barcelona